What Do We Know About Refugees?

FRONT ROYAL, Va., Feb. 17, 2017 /Christian Newswire/ — What do we know about the religious and political beliefs of refugees and asylum seekers who have entered the United States these past eight years?

The U.S. takes more than twice as many refugees as all countries from the rest of the industrialized world combined. But for leftist activists, the number of refugees entering the U.S. is never enough and our borders should be open for all.

However, these same activists seem to only care about the resettlement of Muslims refugees and rarely, if ever, speak out for persecuted minority Christian refugees. Why? 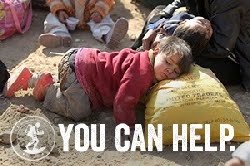 The previous administration admitted more Muslim refugees to the U.S. than any time in our history. A closer examination of this reveals startling evidence that the motivation to resettle Muslim refugees is not based on humanitarian concern. Rather, the reasons may be political.

According to a report by Pew Research (July 22, 2016), when it comes to political and social views, Muslims are far more likely to identify with or lean toward the Democratic Party (70%) than the Republican Party (11%) and to say they prefer a bigger government providing more services (68%) over a smaller government providing fewer services (21%).

In other words, Muslim refugees, when they become eligible to vote, overwhelmingly support the Democratic Party and remain on public assistance. Christians, on the other hand, are more likely to vote with the Republican Party and become self-sufficient. Tragically, this could be one of the major reasons persecuted minority Christians were basically ignored these past eight years.

Refugee resettlement should be based on persecution and threat of death, not on politics.

„There is strong evidence that many Muslims hold views that clash with Western norms,“ says CFI President Jim Jacobson.

Of the 10,000 Syrian refugees admitted to the U.S. over the past 12 months, less than .5 percent were persecuted minority Christians.

To find out how you can help please visit our website www.chrisianfreedom.org, or call 800.323.2273